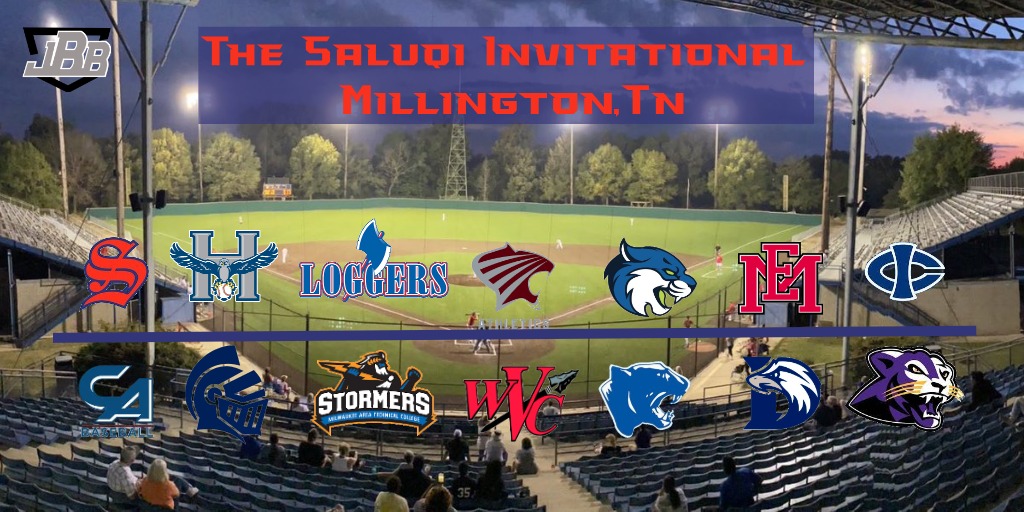 Another week another big-time Junior College tournament. This week it is in Tennesee. For this we tried to collect as much info as we could in regards to all the team but do to some life stuff and trying to get this out in time we do not have as in-depth of a look at every team. May we were able to get stuff from but some we could not and so we went with what we had.

*Pitching Rotation is Subject to Change*

Bryant & Stratton is getting their first go at it this year. They are looking to get this started in a big way. They have are one of the only teams playing 6 games this weekend playing a Double Header with Lincoln Land on Sunday after the main Invitational is over with.

They look to be going strong. With a solid mix of returners and newcomers, they are looking to be solid. Look for Ethan Toone to have a big starting weekend. He has shown that he can be both productive behind the plate and at the plate when it comes to the offensive side of the ball for the last year for them as well as this fall. Also on the offensive side look for their returning starting Short Stop to have a solid weekend in Tyson Ludwig. If he does what he did last year look for him to get on base and steal bases at a very high rate. One other player to keep an eye on for them is going to be Danny Llanas. Danny was a solid two-way player for them last year who hit 6 home runs for them and was up to 90 on the mound in multiple appearances for himself.

All in All, they are playing a very competitive weekend and have the potential to make a lot of noise if things go their way all weekend.

Carl Albert comes into this weekend battle-tested. With games against Panola, Eastern Oklahoma state, and Northeast Texas all under the belt in which they came out 3-2 against those three.

Carl Albert is always going to come out swinging. Look for Jon Shaffer, Dylan DeButy, and Matt Schilling to continue what they have done in the early going for them. Also, keep an eye out for Breck Burris to get things going in the right direction. He has had a bit of a rough start to the season but if he can get things figured out then it is going to be a lot of fun to watch what unfolds.

Cleveland State has had a short start to the season sweeping Vincennes and dropping one to both Wallace State and Georgia Highlands. So far they have put together solid games and have competed in all of them.

After a rough start to the season down in Floridas going 0-3 vs St. Petersburg, Polk State nd Central Florida; Dyersburg has bounced back and have rattled off 7 straight wins. Dyersburg only has 2 games this weekend but both are against solid competition in Wabash Valley and Carl Albert.

This weekend is going to tell a lot about the depth of Dyersburg. With a few guys out with some small injuries and some personal reasons, they are going to rely on Aidan and Christian to keep up the momentum they have built this season. On the offensive side look for Lucas Cook (Purdue Commit) and Gabe Briones to keep doing what they have been doing this early in the season which is hit.

They are going to have a solid weekend and learn a lot about who they are as a team with those few guys out.

The school that everyone knows from the Netflix Series “Last Chance U” has a baseball team. And they are usually pretty competitive when it comes to the state of Mississippi. This season so far they have played one series that they lost to Snead State. In those games, despite losing 3 of the 4 they had 10 Homeruns and scored 26 runs.

For them, they have a solid group of guys to keep eyes on. Kylan Stepter (South Alabama Commit) will come out of the pen at some point this weekend. He has been up to 95 this year has is looking to be one of the go to arms for them. Out in the field look for the group of Wesley Sides (INF, SO), Kade Shannon (C/DH, SO), Beau Bates (OF, SO), and Hunter French (OF, SO) to all be producing in one way or another for them (All of them are also uncommitted at this time.)

Ellsworth has been a team that has had its ups and downs over the last few years. So far this season they have played 1 series which they lost to NOC-Tonkawa. They have not found their stride yet it looks like but the season is still very young for them. This weekend they take on some tough competition that is going to be a challenge for sure.

Heartland is another school that is getting it’s first go this weekend. They are usually a very solid team year in and year out. And This year looks to be a lot of the same for them. They have a lot of depth in the way of a few freshmen in Ben Hartl (3B/C) who looks to be extremely athletic and is going to be a middle of the order bat for them and Catch most likely in the second game; as well as Sam Antonacii who is a solid left-handed bat that will man Short for them that and looks to have what it takes with all of the tools.

When looking at the Returners and Transfers, Riley Rundquist is back and will be in the 3-hole for them. He might not look like it but (and i Quote) “He is a Big Thick boy that can just hit” and he sure did that last year and is projected to do the same for them this year. Tyler Brandenburg looks to be a big-time pure bat for them coming the way of Purdue.

Iowa Central has one series under the belt in which they took the series from NOC-Enid 2-1. They looked solid with the bright spot being in the third game where they had a duo of pitchers throw 7 innings striking out 14 with only 7 base runners in the duo of Easton Dermody and Evan Borst.

Other Key players to look at for them are going to be Brock Johnson (INF/POF), Jalen Martinez (OF/LHP), Max Holy (SS), and Nick Baker (C) all of which are going to be a big part to the team success this weekend.

Jackson State should have 4 games under their belt but due to weather, they had 2 canceled with Lincoln Trail and have only played in 2 against Itawamba in which they lost both.

Lincoln Land like a few others starts off their season this weekend. They have 2 games in the Invitational then 2 more vs Bryan & Stratton (WI) Sunday that is not a part of the Invitational. And in those last two games, they will throw Riley Bradshaw (Morehead State commit) and Jake Curtis (Memphis Commit).

For them on the offensive side look for Jake Curtis (RHP/2B, SO, Memphis Commit), Jayden Myren (SS, SO, SIU-Carbondale Commit), Ian Benner (OF), and Drew Ezard (C, FR) to all have big weekends and impress people in multiple ways.

Milwaukee Area is another school year that is getting its first taste of the season. To start they are the only Division 3 team in the field. So the cards are already stacked against them But do not let that fool you on these guys. Over the last few years, they have shown that they are ready to compete with the best. They seem to have a very balanced lineup. Look for Peter Fusek, Winston Parke, Joe Fiorillo, and Julian Jimenez to make a lot of noise for them as they kick things off.

Olney is another team looking to get the first crack at the season. If they are like the recent Olney teams that are going to be able to hit and hit well.

After a rough start going 0-5 Southwest Tennessee has rallied off 4 straight in impressive ways. Outscoring their opponents in that stretch 51-8. In that span, they also stole 13 Bases so look for them to get on base and make things happen on the base path.

Another school getting their feet wet this season.

St. Charles is another school looking to get its start this weekend. It is not going to be easy but it is going to be good none the lease. They have to guys that people should keep their eyes on, on the offensive side of the ball in the way of Zack Floyd who hit 7 homers for them last year and stole 28 Bases, Spencer Hunter who hit 9 homers last year, and then Justin Congiu who comes in from Xavier with some big expectations.

Wabash has been in on a run this season. After losing the early game down in Panama they have been on a run. Winning the next 5. They have done it both through pitching and through the bats. They have been meshing well as a team and expect that this weekend is going to bring them closer as a group. Look for Miles Austin and Brian Kalmer to continue to swing the bat well for them.