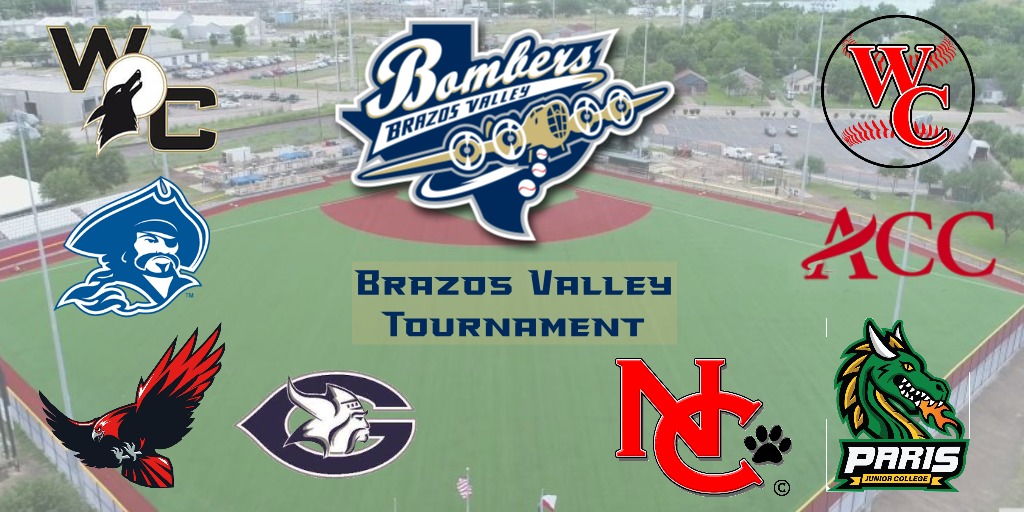 Another Week, and another Big Tournament taking place. This one is a bit different than Panama City because this one does not have a bracket per se. But this one is taking place in the Brazos Valley Bombers Stadium in Bryan, Texas Just outside of College Station. Some people may know this team from 2020 back when they hosted the CSBI (Collegiate Summer Baseball Invitational) during the height of the pandemic.

This field is also the home of one of the premier summer collegiate teams in the state.

This weekend will also be streamed by our friends over at TSRN.

This Tournament is fielded by all but one pre-season top 50 team and on top 5 team in Weatherford. Texas is always loaded and this tournament is going to give a very good pre-season preview for how this season is going to pan out.

*Home is the first team

*Arms are Subject to Change*

*All Pitching Rotations are subject to change.*

Like most Alvin has gotten off to bit of a slow start to the season. Starting with one of the Region 5 front runners Midland in which they got swept then have gone .500 since. Alvin is a group that is going to be scrappy. They have young arms that have a lot of talent and a handful of bats that despite what the records have said have produced very well for them. Bryce Hughes (SS, CFR) has been one of their biggest producers so far this season hitting .440 with a home run 5 rbis and 7 runs scored.

To say Blinn is off to a rough start isn’t fair. Their 3 games have been against #4 Weatherford which they played pretty close until the last game which was 11-1. Blinn is going to compete as they always do look to be one of the top spots in the south of Region 14.

Blinn has a solid mix of guys that they are still trying to find the right mix of guys to have on the field at one time. They ahve a lot of arms that are looking to through for the first time this weekend as well as a lot of bats that are going to be itching to get going.

So Grayson had the lovely spot of opening up the season against the #1 team in the country San Jac and that went about as good as you could think. They lost both but it did show a lot of ground for them to grow and what they have to look forwards to . Since they have been a bit of snow-locked due to the weather that has affected a lot of the region they have not been outside much in the past week or so.

Their bats have the potential to be really good and hopfully this weekend is where they will show how impactful they can be. With the duo of JD Gregson (C, FR, Texas A&M Commit), and Davis Powell (SS, SO, Texas State Commit) leading the way for them they will be in good hands when the weather starts to warm up.

For Howard, they got off to a rough start due to the weather. They had to change up their schedule a bit but still played 2 games to oepn up the season this past week. They lost both to Angelina and Navarro. That though should not be a huge issue. The did have a few glimpses of what could be an exciting season for them. Hunter Simmons (OF, SO Texas Tech Commit) led the way with 2 homers opening weekend while their leadoff hitter Austin Douglas (OF, FR) went 4-9 in the two games. Howard looks to like they are wanting to get things rolling in a big way this weekend and this is one way to get that started.

Navarro has been on a pretty good start. With what might be the most “Legit” Split you can get with a team in McLennan where they one a game, lost a game and then tied. Out side of that they have had a pretty good go of it. Back under Whoa Dill, they have got things going back in a good direction.

For Navarro some of the top offensive performers for them this season have been the duo of Ethan Bates (INF, SO) who is leading the team hitting .429 with 3 doubles, 2 triples, a homer and Xavien Thompson (OF, FR) who is hitting .400.

Other Players to Watch: Joel Shea (RHP, SO), Bryce Jones (OF, SO), Campbell Sullivan (OF, FR)

One team that we said to keep in a eye on this year was Paris. And so far they have lived up to that billing. So far they are Nationally ranked in some very impressive catagories as a team. They are ranked 1st in 3B (12), Slugging % (.746), Extra Base Hits (37); 4th in On Base % (.521), and Stolen Bases (22); and finally 5th in Doubles (21). Leading that offensive for them is Pre-Season All-American Beau Brewer (Western Kentucky Commit), he is currently hitting .632 to start off the season with 6 Doubles (2nd in the country) with 9 RBIs and scoring 7 runs himself. This is going to be a big weekend for paris against some of the top teams in the state and is going to say a lot about what kind of team they are as a whole.

Weatherford has been what we all thought they were going to be… Good. They have been clicking offensively, the pitching staff has been lights out. And so far everything has being going according to plan. When looking at the National Stage other the Iowa Western who has not played yet Weatherford is the highest ranking undefeated team left.

For Weatherford, they have a deep infield and have not finalized what it is going to look like. With the group of Peyton Benesh (MIF, SO), Cade Merka (MIF, SO), Chase Pendley (INF, SO), Eddie Calzoncit (INF, SO), Austin Green (MIF, SO, Texas Tech Commit), and Noah Boughton (INF, SO, Dallas Baptist Commit) they have a wide range of possoblities that they can play with to make the perfect infield for them. This is going to be a big weekend for weatherford in regards to how they fair in both the State and in Region 5 as a whole.

Other Players to Watch: Alex Vergara (OF, SO), Cal Stark (C, SO)

The first 2 weeks of the seasons have seen the ups and downs for the Pioneers. When the bats are hot (>5 runs) WCJC is undefeated. The 2021 Region 14 league leader in homeruns has picked up where they left off with 7 HRs through their first 7 games. Hunter Smith (OF, FR), Brayden Evans (1B/OF, FR), Will Lee (OF, FR), and AJ Kostic (INF, FR) are just a few of the hitters with healthy averages in the lineup. As the bats go, so do the Pioneers.

On the mound Rome Shubert (RHP, FR) has set the tone with 8 scoreless innings pitched. Kole Tauzin (RHP, FR) has been perfect out of the pen in 3 relief appearances, and Andrew Kithil (RHP, FR) is pitching at respectable 2.84 clip.