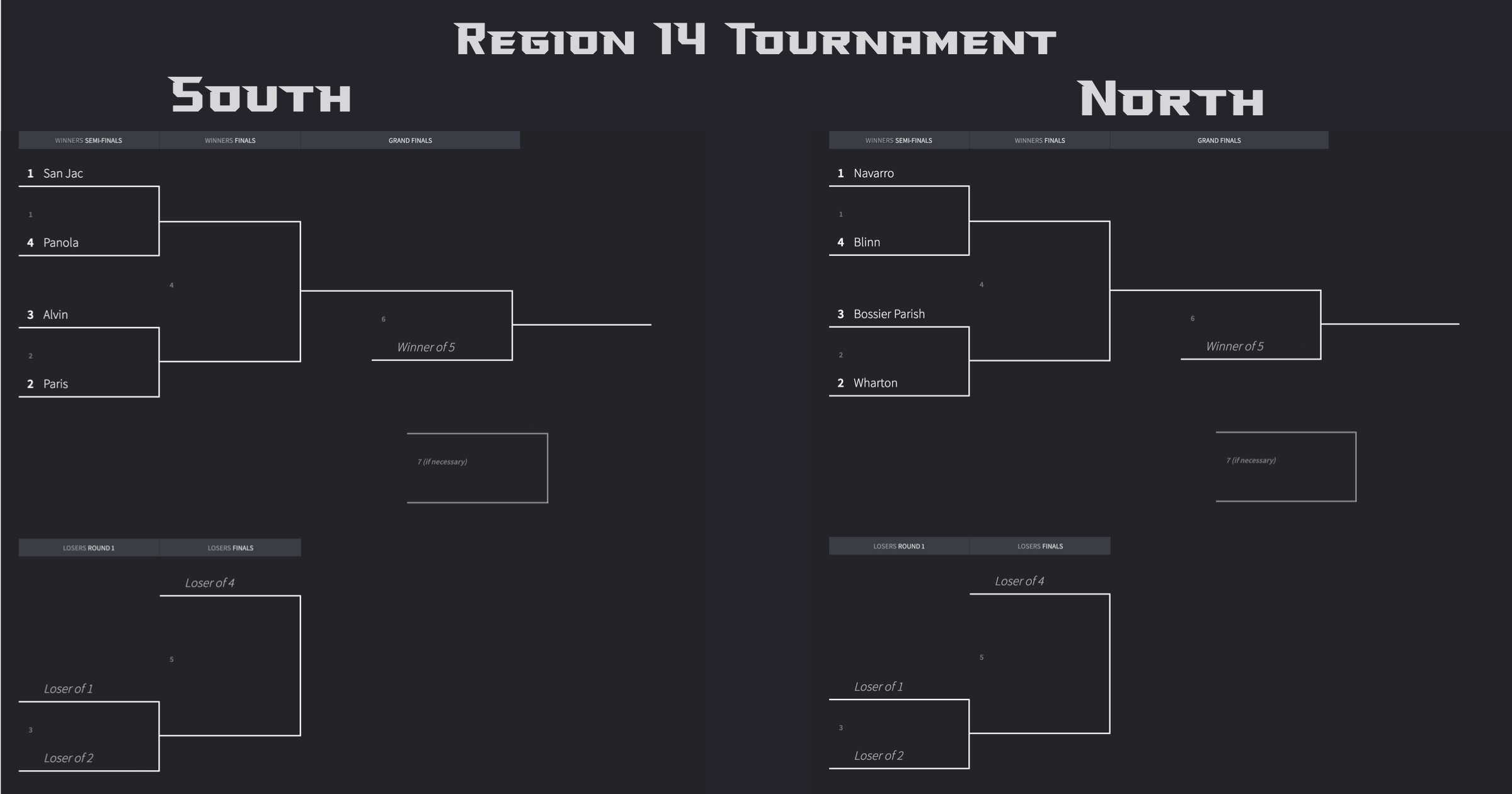 Region 14 decided to change how they are doing the post-season this year. And honestly, everyone that we have talked to loves it.

Here is how the Standings ended for each Conference:

To start the 4 Seed from the South was claimed by Blinn after beating Galveston in the play in game 8-5.

All of these games will be played at UT-Tyler’s Field.

This side of the bracket in our opinion is wide open. All 4 Teams stand fairly even with each other and it would not surprise us if any of these 4 made it to the “Super Regional” Next Weekend.

Navarro came into this season looking to continue what they had the “year” prior finishing 3rd in Grand Junction. Navarro comes into the Tournament after a Big Sweep of Tyler after not having played since the beginning of April due to Covid Reasons. However the Bulldogs have had some big wins throughout the season despite the pauses in play.

One of the biggest edges for Navarro in this tournament is that Navarro is fresh only playing 3 games in over the past 3 weeks. Yes, that could hurt them but this would be the time that it would pay off to have your pitching staff rested.

As mentioned above, Blinn got the 4-Seed with a play in game win. Blinn was a team that came out hot this season making it into the Top 25 for a week before struggling down the stretch. However that does not mean that Blinn will go down without a fight. They are a scrappy bunch led by a Juco Lifer.

These two teams were scheduled to play early in the seasons but due to the National Frost that happened they did not get to play.

Wharton started the seasons in our Top 50 and have stayed right around there all season. Coming down the stretch they controlled their own dynasty. As long as they won the final series of the season they were the 2 Seed coming out of the South. Wharton sits just north of the .500 mark on the season. They are a scrappy bunch that can beat you in more ways than one.

Bossier Parish is almost a mirror image of wharton when looking at how their season has gone. Started off in the Pre-Season top 50 and have stayed right around there all year. With an almost identical record to Wharton. If Bossier Shows up like they have in some of their games this is going to be a very interesting game to watch.

Noah – As mentioned at the start of this section, this side of the bracket is really anyones to win. Any school could win it and there is really no clear “Favorite” on this side. With that being said, I feel like Blinn stuns Navarro in Game 1, Wharton wins a Slugfest in Game 2 over Bossier Parish, Wharton wins a close one over Blinn in game 3, Navarro eliminates Bossier Parish in game 4, Navarro Eliminates Blinn in a close one in game 5, Navarro then beats Wharton in game 6 forcing a winner take all game 7, But Wharton takes the game due to less games being played.

The south has a much different look than the north does. San Jac is the clear favorite here. They are hosting this side of the bracket and are looking to make their way back to Grand Junction for the first time sense 2018.

The 4-Seed on this side was claimed by Panola after they beat Northeast Texas 16-7.

San Jac has been ranked in the Top 10 for the majority of season falling out of it in just the last few weeks. Coming into the season there were questions due to them being young but those were answered very quick. San Jac can beat you on the mound or they can beat you at the plate. Their strength however has been the mound with the Mid-Season Pitcher of the Year Thomas Burbank, who started off the season on a tear and was almost unhittable for the first 2 ½ months of the season.

Panola comes into the tournament getting in on the play in game. They have not had what they thought they would this season when it comes to success. But hey, they are in the dance so anything can happen now.

This is the first matchup between these two this season.

Clay Cox has turned the culture around fast at Paris. Bringing home the 2-Seed in the North. Paris has been one of the top teams in the country all year when it comes to Triples and Stolen Bases. They are fast, like to steal, and know how to run.

Alvin has really been the only answer for San Jac season. Playing them in 8 games and winning 3 of them. Yes that is not the best win percentage but it is the best any team has done against them all season. Alvin’s biggest strength has been there pitching staff with some front line arms and scapy back end.

It will be the first time these two schools play this season.