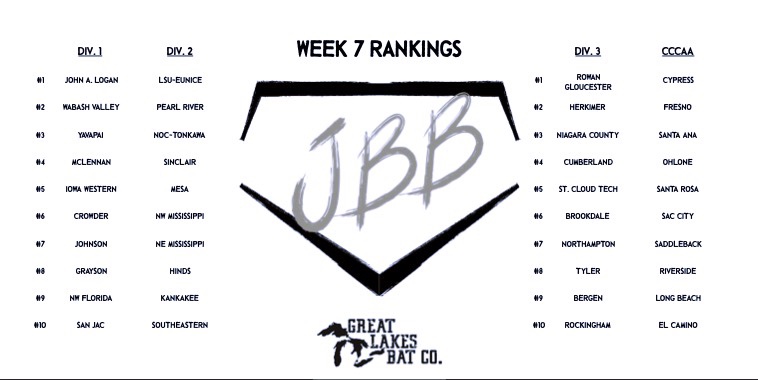 Another week with more unfolding. More teams are starting, tons of games happening all over the place, and even more movement!

The top 5 stayed the same this week:

This is where things at the Division 1 level start to change.

Like the Division 1 level the division 2 level top 3 remained the same but there was some shuffling.

This is where a lot of movement starts to happen at this level.

With a lot of teams just starting at this level things are about to start shaping up.

And just like that there is a new #1 in California. This past week might have been the most moved packed week so far this season.

This is going to be a new part of the rankings brought to you by one of our new Partners.

The FloSports Next 5 Out

This is a quick look at the Next 5 team just outside the top 25 in each of the 4 rankings.

Kansas City Kansas- They make a huge jump after winning their series against #6 Cowley.

South Mountain- They continue to make waves out in Arizona. After a rough start have rattled off 12 straight wins and currently sit tied for 1st with Yavapia in the always crazy ACCAC.

Georgia Highlands- They stay right where they were last week after not playing any games this past week.

Dyersburg State- Dyersburg has sat just outside the next 5 for a few weeks now. They were 3-1 on the week sweeping Southwest Tennessee in 3 games and dropping 1 to Rend Lake.

Arizona Western- Talk about a week. In Arizona if you have followed us you know can be crazy. AW started the week with a split of Yavapai and finished with a sweep of Glendale.

Lackawanna- After a tough start to the season the Falcons seem to be getting back into the groove of things. After a 2-1 week they are looking to build off that.

Northeast- This is another team that has had a tough start to the season. They split this past week with McCook.

Iowa Central- They have slowly been on the rise and are looking to break into the top 25 any week now. After a 2-1 week which brings theri overall record to 6-2.

Pitt- Thanks to some big early season wins against East Georgia State, and Catawba Valley (Twice) despite the 10-9 record they remain just outside looking in.

Vincennes- this is a team many people have probably never really thought about this season. They currently sit at 10-5 and have slowly moved up the ranks each week.

SUNY Adirondack- Adirondack has some sneaky good wins. Splitting with Bergen to start the season and then sweeping this past week against Minnesota West.

Cedar Valley- These guys play in one of the toughest conferences there are at the Div. 3 level. With multiple teams in their own conference national ranked every year its hard to see through the top few. They swept Dallas Christain this past week then lost their series with Richland 1-2,

Prince George’s- After a 1-1 week they moved back into the next 5 for the second time this season. They split with Bucks County who is just ahead of them this week at #25.

Massasolt- Massasolt started their season this past week and went 2-1, winning their seris against Mohawk Valley 2-1.

Waubonsee- They have played 2 games so far this season and are 2-0 thats about it for them so far.

Monterey Peninsula-Monterey has slowly been climbing this season so far. After a 3-0 week where they swept Hartnell pushed them into the Next 5 for the first time this season.

Irvine Valley- Even though they had a losing record this past week they did take 1 game from former #1 Santa Ana and pushed them to 11-8 on the season and into the Next 5 for the first time.

San Diego City-San Diego City dropped from the top 25 this week after losing a game to San Diego Mesa. They are 13-6 on the season after the 2-1 week.

Marin-Marin remains in the Next 5 for the 4th time this season and 3rd in a row. They were 1-2 on the week winning a game against former #21 Los Medanos

It is still not too late to make Pitcher and Player of the week submissions >>> https://forms.gle/EzMT4FaKePeLY2kj9

Also make sure you go check out The Great Lakes Bat Company. From Custom bats, to team stores and Jerseys. Tell them that The JBB sent you and they will make sure to treat you right