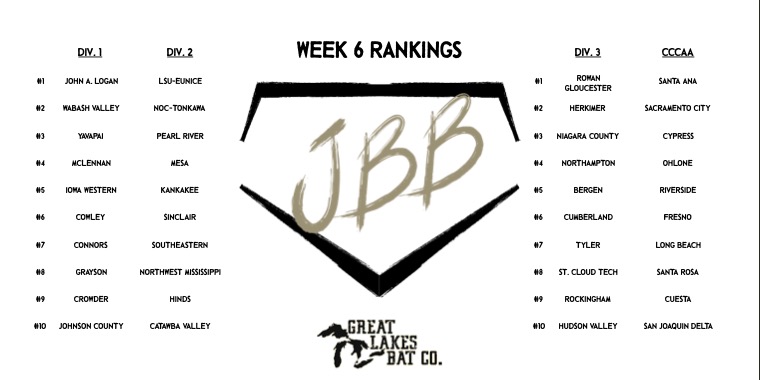 After last week we did not think things could get any crazier… Well we were wrong! So let’s just dive in and see how crazy it actually was.

-The top two spots remained the same. John A. Logan continued their winning ways and moved to 16-0. While Wabash Valley swept their weekend to bring them to 11-2.

–Yavapai moves up one spot to #3 after a 4-0 week in which they topped the then #2 ranked division 2 team Mesa, and then took two from a very good Cochise team. It brought their overall record to 19-2.

-The next two spots belong to Iowa Western and Cowley. These two squared off this past week both splitting. Both now have 10-4 records. Iowa Western dropped from #3 to #5; While Cowley jumps from #8 to #6.

–Connors drops one spot to #7 after going 5-1 on the week dropping just one game to Rose State.

–Grayson dropped their mid week game against Navarro but then put together a very impressive weekend which they swept their weekend series against Carl Albert and out scored them 56-14. This week dropped them just one spot to #8.

-The next two spots go to teams that are making it into the Top 10 for the first time this year.

-Crowder jumps 7 spots to break into the top 10 at #9. They had a 7-0 week. The started it with a 31-0 win over Labette. Then swept Lake Land out scoring them 15-1 in two games. They finished the weekend with a 5 game sweep of Indian hills out scoring them by a total of 52-11. This past week they outscored their opponents by an outrageous 98-12.

–Johnson County rounds out the Top 10 this week jumping up 10 spots to the Ten Spot. They were 4-0 on the week with a 4 game sweep of then #8 Kirkwood.

–Butler goes from Unranked to #24

This is where things get crazy. For the second week in a row the Division two ranks flipped all around.

–Pearl Rivers moves up 1 spot to #3 after a 3-0 week win which they saw a double header No-Hitter early in the week.

–Kankakee moves up 2. They still have not played any games but people keep losing so hey Cavs looks like being one of the last teams to start playing has paid off so far 😉

–Sinclair drops 3 spots to #6 after a 0-3 weekend when they took on a team looking in from the outside of the Division 1 Top 25 in Georgia Highlands.

–Southeastern counties to roll going 4-0 and making them 11-1 on the season. This jumped them up to the #7 spot.

–Hinds makes the biggest jump this week jumping 12 spots to #9. This past week they went 4-0 sweeping then #18 Jones, and then Delgado.

-Rounding out the Top 10 is Catawba Valley. They went 2-2 on the week losing two games to Pitt. This dropped them to just 1 spot and brings their overall record to 8-3.

–Delaware Tech goes from Unranked to #20

–Frederick goes from Unranked to #21

More Division 3 schools started playing but not much changed.

–Herkimer, Niagara, and Northampton all move up 1 spot.

–Bergen dropped 3 spots from #2 to #5 after going 1-1 on the sweek splitting with SUNY Adirondack.

For the third time this year the CCCAA top spot has changed.

–Santa Rosa won their series this past week over then #15 Sierra 2-1 but still dropped 2 spots to #8.

–Cuesta makes their first appearance in the Top 10. They swept their week going 3-0 which takes them to 12-4 overall. This jumped them from #11 to #9.

–San Joaquin Delta rounds out the top 10 dropping from #4 to #10. They were 1-2 on the week losing the series to Modesto.

–Canada goes from Unranked to #24

It is still not too late to make Pitcher and Player of the week submissions >>> https://forms.gle/EzMT4FaKePeLY2kj9

Also make sure you go check out The Great Lakes Bat Company. From Custom bats, to team stores and Jerseys. Tell them that The JBB sent you and they will make sure to treat you right!