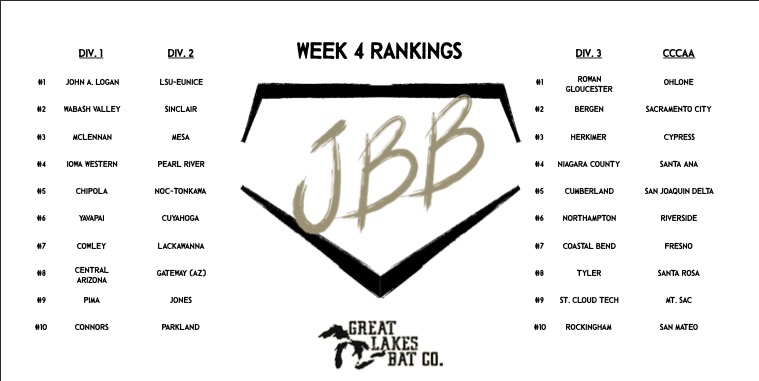 This is another week that saw a ton of actions!

At the Division 1 Level we see our first change up top. John A. Logan moves to the top spot after a 3-0 week moving them to 7-0 on the season. Wabash Valley dropped 1 spot to #2, McLennan dropped  to #3 and Iowa Western Stay at #4. Two big jumps happend with Pima moving from 16 to #9 and currently sit at 13-0, Grayson was the other big jump after sweeping the Tournament of champions they jump from #19 to #13 thanks to 2 big wins over San Jac. There are three new teams in this weeks Div. 1 Ranking:

At the Division 2 level was not as crazy as the Div. 1 level this week. The top 4 teams stayed the same. NOC-Tonkawa jumped up to #5 with a series win over Des Moines Area pushing them to 10-1 on the season. The Div. 2 ranks saw 2 new teams make their first appearance in the rankings as well:

-Southeastern checks in at #22 after sweeping both Jones county and Meridian.

Not much happened at the Division 3 level. With the majority of the teams not starting for another week or two there is not much movement. Coastal bend did break into the top 10 coming in at #7 thanks to a series sweep of Panola.

Out in California the top stayed the same with not huge notable moves. Both Cypress and Santa Ana jumped over San Joaquin Delta which moved Delta down to #5. Santa Rosa remains undefeated and moved up to #8. California did see 3 new teams make their way into the rankings: