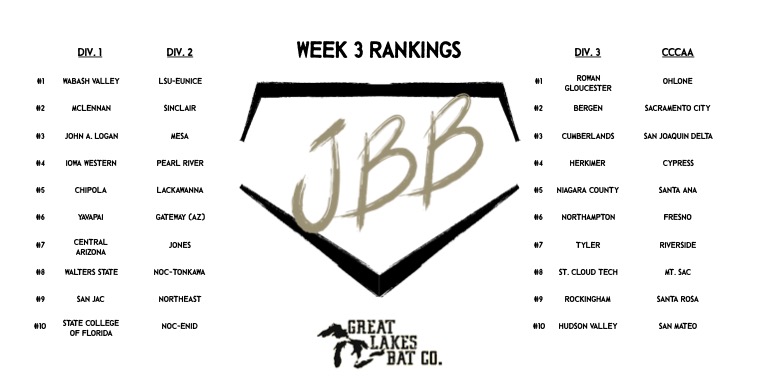 So the Division 1 level in the top ten this week is what some Military personal might call a Charlie Foxtrot. (C.F.) ;). The top 3 stayed the same. Central went 1-1-1 down in Arizona, Iowa Western Did not play. State College of Florida went 1-4 dropping to #10, San Jac went 1-3, dropping to #9. Yavapai jumped up 2 spots after winning the Zinger invitational. Walters state went 1-3 and stayed at 8. The  biggest jump this week was from Chipola jumping into the top 5 after a huge 4-1 week.

Not much movement happened this week at the Div. 2. LSUE Toppled over Paris, Jones lost 2 of 3 against Dyersburg but only dropped 2. NOC-Tonkawa did sweep Northeast in their 4 game series which jumped them up number 8.

There was not much going on at the Div. 3 level this week, Tyler swept their series, Brookhaven lost their series against Div. 1 Johnson county 3-1. Richland made a big jump to the next 5 out after putting on an offensive show this past week against Spartans Post Grad. There will be more and more Div. 3 schools starting up in the coming weeks.