What made the Legend of John Altobelli 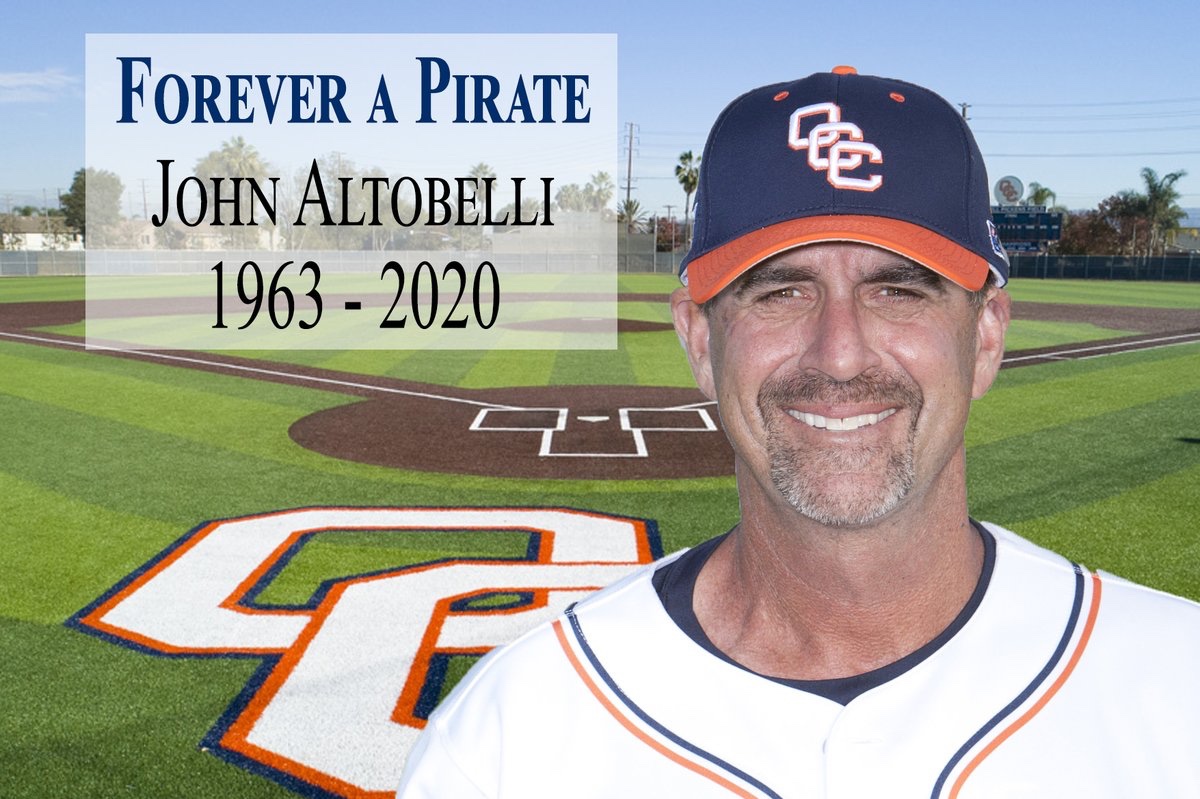 Friendship is a funny thing.

It can be defined as “a state of mutual trust and support between two parties.”

Something that goes under the radar is the friendships that parents create with each other when their kids are involved.

John Altobelli and Kobe Bryant came from two completely different worlds. One was a world-class basketball player with multiple championships, MVPs and Olympic medals. The other, one of the most decorated junior college baseball coaches in the country with multiple state championships, over 700 wins, and hundreds of guys going to play at the four-year level.

But yet, those two individuals were close friends because of their 13-year-old daughters. John would never boast about his friendship with Kobe. It was just the dad of one of his daughter’s best friends. It would get brought up in conversation and he would not brag, he would just talk about their daughters and their friendship.

Alto, as his friends called him, was the definition of a stand-up, family-centered guy.

“It wasn’t all about the state championships, the records, the on the field accomplishments,” said current Midland College assistant coach Bo Altobelli, John’s nephew. “It’s about the relationship with the players both on and off the field. He wanted them to know that he had their back regardless of what happened.”

When asked about their time in 2018 overseas running an academy together Ohlone Head Coach Mike Curran said, “I only knew of him because of his success. However, his success was not at all something he flaunted. We went out every night. He was a great storyteller and had no problem throwing little jabs here and there to make everyone laugh. I was only with him for a week, but in that time, I found someone who was kind, funny, genuine, and just a really easy person to spend time with.”

His genuine nature alone could be reason enough for this legend striking a friendship with one of sport’s biggest legend. But there was more common ground between the two, a shared fire.

On the field, Alto was a competitor. He would argue calls, get in arguments and occasionally get thrown out, further showing his support of his players.

In 2009, when Orange Coast won the CCCAA State Title, Alto was dressed in his street clothes outside the dugout because he had missed the last month of the season due to being tossed too many times. After OCC recorded the final out that day, after a month of having to be on the outside looking in, he finally got to be back with his “family” and was part of the dogpile, jeans and all.

Alto’s relationship with his Alma Mater, the University of Houston, is something that was strong until the day he passed. On Saturday he was texting Coach Whitting about a player that he had.

“If Alto gave, as he called it, the ‘Alto Stamp’ to a guy, we knew it was someone that we had to go look at,” said University of Houston Head Coach Todd Whitting. “He would never push guys our way ,but if he knew we were interested then he would make sure those players knew this was a good spot to come.”

Todd was just a few years younger the Alto when they were both at the University of Houston in the mid to late 80s.

“When you talk to a lot of guys about their college days maybe two or three are still close. There is a group of maybe eight or nine from those years that still see each other a couple times a year. All those relationships had to do with Alto. He was our captain, a guy everyone liked and respected,” Todd continued

Alto’s legacy spared no one from its grace, not even family.

“When I was recruiting last summer, at the University of Houston, I was walking around the field and came across a plaque of former players. I started looking at it and came across a familiar name. John Altobeilli USA Baseball Coach,” said Bo. “It was something I wasn’t looking for but was so cool that he had that much of an impact on this school and they honored him like this”

Alto made sure he included his family in everything. His wife and girls were always at the field.

“As a baseball coach, you spend a lot of time at the field, so whenever he was their he made sure it was a welcome place for his family,” Bo said. “In 2019, at the ABCA Convention in Dallas, I ran into him by accident in the lobby of the hotel. He was there talking to his old college roommate and best friend David Pierce. Then I see his oldest daughter walk up. John made sure when ever he traveled that his family knew they were welcomed.”

When Whitting would go out to California to recruit, he always made sure to make it to Costa Mesa to see Alto. When asked what they would do, he replied, “He had this little Mexican restaurant called Mi Casa. We probably ate there every year i came of for maybe the past 10-15 years. Him, the girls, his wife and JJ when he was in town. It was a whole family affair.”

When it came to his professional friendships and relationships he had, everyone would trust what he had to say.

“When recruiting one of his guys, you would get the good, the bad, and the ugly. He would never do anything to hurt his kids but gave great evaluations of where his guys should be,” said Todd.

When it came to recruiting the high school guys and bringing them in California PBR Scouting Director Les Lukach said, “There’s not a high school coach in the area who wasn’t friends with Alto. He was always gracious with his time, never rushed and always made sure he gave me the information I was seeking.”

When it came to other coaches in the CCCAA there was nothing but praise and kind words when asked about their relationships with Alto. “He is the best coach of the best program in the state, and has been for over a decade. And that pales in comparison to the man he was. His caring, humor, competitiveness and ability to be prepared for the moment is what you saw in his players and those he influenced. He carried himself in a way that you wanted to model yourself after,” commented Derek Sullivan, the Sacramento City head coach.

“Great Coach and he was a great man. He could have been [rude] to me as a young head coach but he was respectful and his players played the game right.” said Ventura College Interim Athletic Director Jimmy Walker.

Friendship is a funny thing.

Whether it is at the professional level, a family level, or as a mentor and role model. It all has the same core meaning.

A mutual respect between the two parties. The friendship between John and Kobe might not have made a lot of sense from the outside. But, when you look at it as two fathers who loved their daughters and share that common respect, it all started to make sense.

They cared about their daughters, and being fathers and mentors to them.