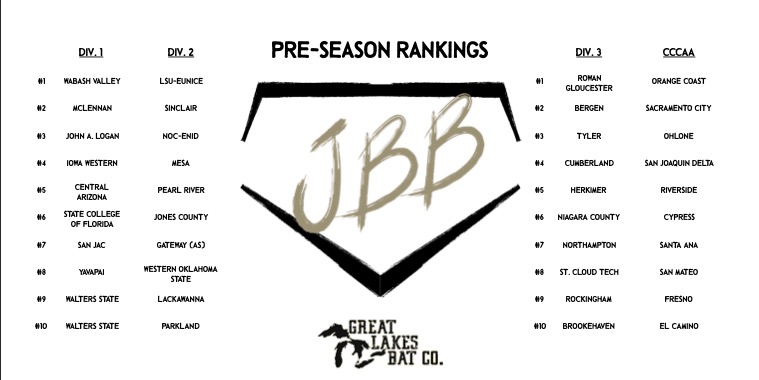 There was a lot that happened this past weekend both on and off the field. As many of you know a Helicopter went down Sunday morning which unfortunately killed 9 people. Included in those nine were Kobe Bryant and his Daughter, as Well as Orange Coast’s Head Coach as well as his wife and Daughter. Our Thoughts and Prayers Go out to all that were effected by this. The game of Baseball lost not just a great coach and mentor but one of the most well respected coaches at any level.

In the NJCAA there was not much action:

-No Division 3 teams played so those rankings stayed the same with Rowan Gloucester on top.

-At the Division 2 level, The only action was by the Florida and Arizona Schools, With Pasco-Hernando Splitting with Santa Fe, Paradise Valley going 0-2-1 on the weekend against Pima, and GateWay taking on Central Arizona and taking the loss.

-At the Division one level there was however a big series that took place in Yuma, Arizona. Southern Nevada travelled down south to take on the Arizona Wester. CSN took game one, but ended up losing the series 2-1. Other then that big series nothing of huge note of huge note happened. St. John’s River did take 2 games from Eastern Florida State, While Gulf Coast State took 2 from Faulkner JV.

A lot happened in the CCCAA this weekend.

-The Top 4 stayed the same.

-The Biggest Week out of any team was from Moorpark. They beat Feather River, Bakersfield and Taft to go 3-0 on the week. Which pushes them to just outside the Top 25.