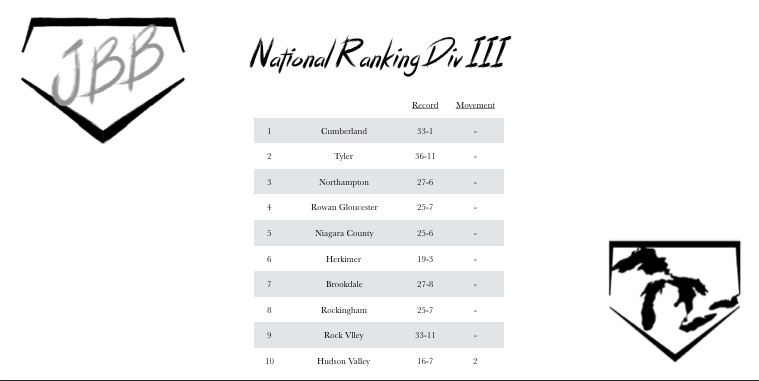 Not much has changed this week in the Top 10. The Top 8 remain the same with Hudson Valley jumping up two spots to the #10 Spot.

Due to the play of ineligible players, Elgin had to forfeit a good chunk of their season. This in turn helped Cumberland County out. Back in early March, the two teams played with Elgin coming out on top. That game only being the second loss on the season for Cumberland. Due to the forfeit, however, that game is now scored as a win for Cumberlands which puts their record at 33-1 with an amazing 32-game win streak. Along with that, this week as highlighted in the weekend preview Cumberlands took on Northampton. In what was supposed to be a doubleheader but due to weather was changed to a single 9-inning game which ended in a 4-3 extra-inning game being won by Cumberlands.

Making their way into the Top 25 this week is Finger Lakes after a big 6-1 week in which they scored 59 runs while only allowing 18.

Do not forget to go check out Great Lake Bat Co. From their revolutionary Bat Fitters to the amazing amount of custom bats. Use the code JBB10 at checkout for 10% off their Pro Series Bats. One of my favorites is their Z1 End-Loaded Models.