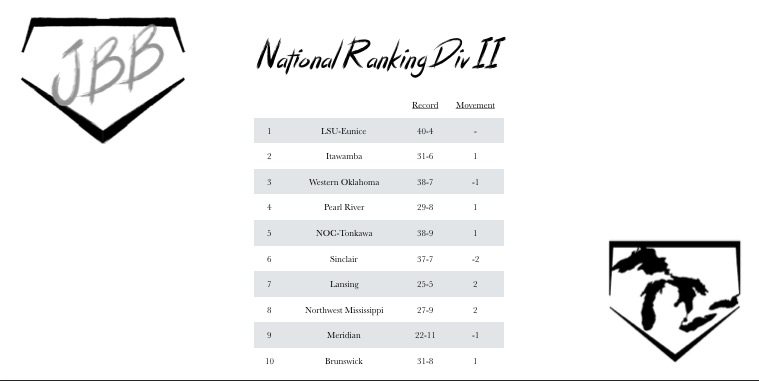 Another Week on top for LSU-Eunice. After a 5-0 week where they put up 55 runs while only giving up 3 total runs.

Itawamba moves back up to #2 after a week where they swept Copiah-Lincoln, East Central, and split with Northwest Mississippi.

Western Oklahoma fell one spot to #3. They also had a 5-1 week. They split with Murray State early in the week then swept Carl Albert state over the weekend.

Making their way into the Top 25 this week is both Bismark State and Northeast.

Bismark State makes it at #25.

Northeast makes their first appearance ever in a National ranking this week coming in at #24. They are only in their second year of a program and already seeing success. This season so far they have wins over NOC-Enid, Neosho, North Iowa Area, and this past Week against Southeastern.

Dropping out was Miles and Holmes.

Do not forget to go check out Great Lake Bat Co. From their revolutionary Bat Fitters to the amazing amount of custom bats. Use the code JBB10 at checkout for 10% off their Pro Series Bats. One of my favorites is their Z1 End-Loaded Models.