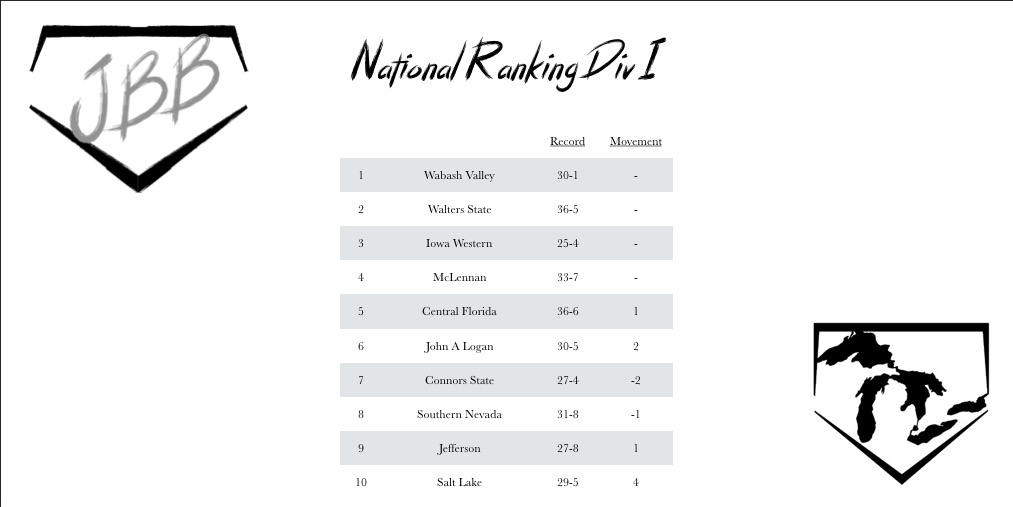 Another week down and another week on top. Wabash Valley has remained on top and does not look like they want to give that spot up. They had a huge 7-0 week, pushing their win streak to now 28 straight games dating back to February 16th. In those 7 games, Wabash put up 88 runs outscoring their opponents by an average of just over 9 runs. Leading that effort was the combination of Cael Baker and Brian Fuentes. Baker picked up where he left off last week after being named one of the National Hitters of the Week. This week he was 12-23 with 3 doubles, 3 home runs, 15 RBI’s, and scored 9 runs. Fuentes was 10-24 with a double, 3 home runs, 9 RBI’s while scoring 10 runs.

Other Notable moves include Salt Lake moving up to #10, Gordon State jumping up to #15, Wallace-Dothan jumping up to #17. While Arizona Western Drops to #20, San Jac drops to #22. and Both Pima and Cochise drop out of the Top 25.

Make sure you head over to The Great Lake Bat Co. to fill your bat needs. Use code JBB10 at checkout for 10% off their Pro Series Bats.