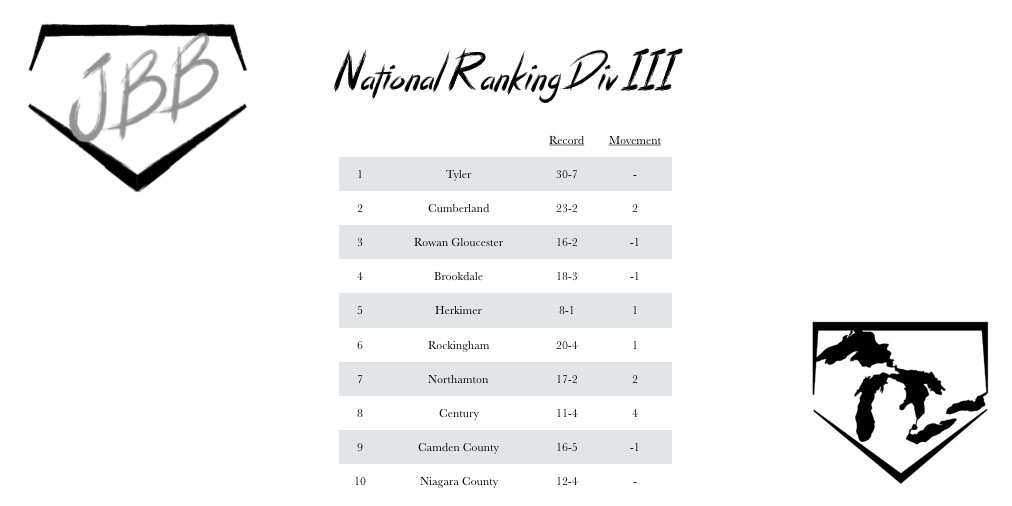 So if you just read the Division 3 rankings then welcome to the first one with a semi recap. If you have been here awhile then well come back.

Although all of those weeks are impressive the one that sticks out the most was Cumberland. Cumberland jumped up to #2 this week because of it. The beat Atlantic Cape (#25 at the time), Rowan Gloucester (#2 at the time), Middlesex County twice (#14 at the time), and 2018 Div. 1 JuCo World Series Participant Monroe. The closest game they had all week was against Rowan Gloucester which was a 1-0 win. The rest they outscored them 38-18. They were led by the duo of Ryan McIsaac (who hit .409 on the week with 2 home runs, 6 runs batted in and 6 runs scored), and Vincent Napolitano, (who hit .261 with a double, 2 home runs, 6 runs batted in, and 8 runs scored).

Two Teams make their first appearance in the Top 25 this week, while another makes it’s way back into it after a few weeks out.

Milwaukee Area Tech makes its way in after a 3-1 week.

St. Cloud Tech makes it back in. They had the week off and are back in action this weekend against Minnesota West and Hibbing

Show thanks to the National Sponsor by heading over to Great Lakes Bat Co. Summer is coming up and if you want some bats to train with or just curious about what is the perfect bat for you use code JBB10 for 10% off their Pro Series bats.