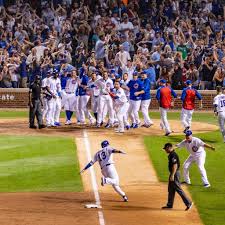 Bringing back what starting this whole crazy Journey. Here is the 2018 All-JuCo MLB Team. The idea is to show what guys out there went to a juco and performed the best this year. Coupled with it this year will be some of the best highlights that happened this past season for of course juco guys whether they made list or not. This years team saw 24 Different schools. Two different had multiple guys from the same school, Chipola had 3 while Neosho had 2.

Starting another new thing for this years team is the manager. There is not as many but there are still managers out there who played at this level. They only way i really know how to pick which would be the “Manager of the Year” is to look at win-loss and the ended up being Bud Black. He helped manage the Rockies to a 91-71 record and they are currently in the NLCS against the Brewers.

If this what a teams Starting 5 I don’t think I would mind one bit. With a Starting Staff ERA of 3.61, 2 of them throwing for 200 innings, You even have all but 1 with a winning record. Each of them played big roles in their teams this season with 2 making it to the post season and others coming just short as the season came an end. The only returner from last years team is Jon Gray.

The pen has a better Era then the starters. With an ERA of 2.54, 24 Wins, and 41 saves if you made it past the Starters good luck getting past these guys. Three of these guys were on playoff teams this year. Ryan Buchter is the only guy to make his second appearance from the relievers.

Kimbrel is making his second time on the list. Keeping up with what he did last year he was one of the big reason the Red Sox are where they are at. With 42 Saves, a 2.74 Era and averaging 13.9 Strike outs per 9 innings.

Good luck getting anything by these guys or even past them at the plate. These 5 were accountable for Roughly 500 runs, with 60 Homers, and an average fielding % of .983. Of the Infield all are making their second appearance on the list.

Two new guys making it in the outfield this year. With a Batting avg of around .300, These three guys were accountable for around 350 runs more than half of the infield. Nothing is going to drop on these guys. The lone returner is Lorenzo Cain.

When you have over 600 runs coming off of the bench with 84 homers along with it you would have to sit happy as a manager. With 3 making last years team (Harper, Blackmon and Flowers) these guys know what would need to get done.

To have a bit of fun i took all these guys threw them on one team and then simulated the season to see what would happen if you took a whole juco team to the rest of the mlb. Putting them all on the Rockies do to the fact that was the Managers team they ended the regular season with a 96-66 record making it to the wildcard. They won that but then lost in the First round. If you want to take this as how they would actually end up then do it but hey they win.